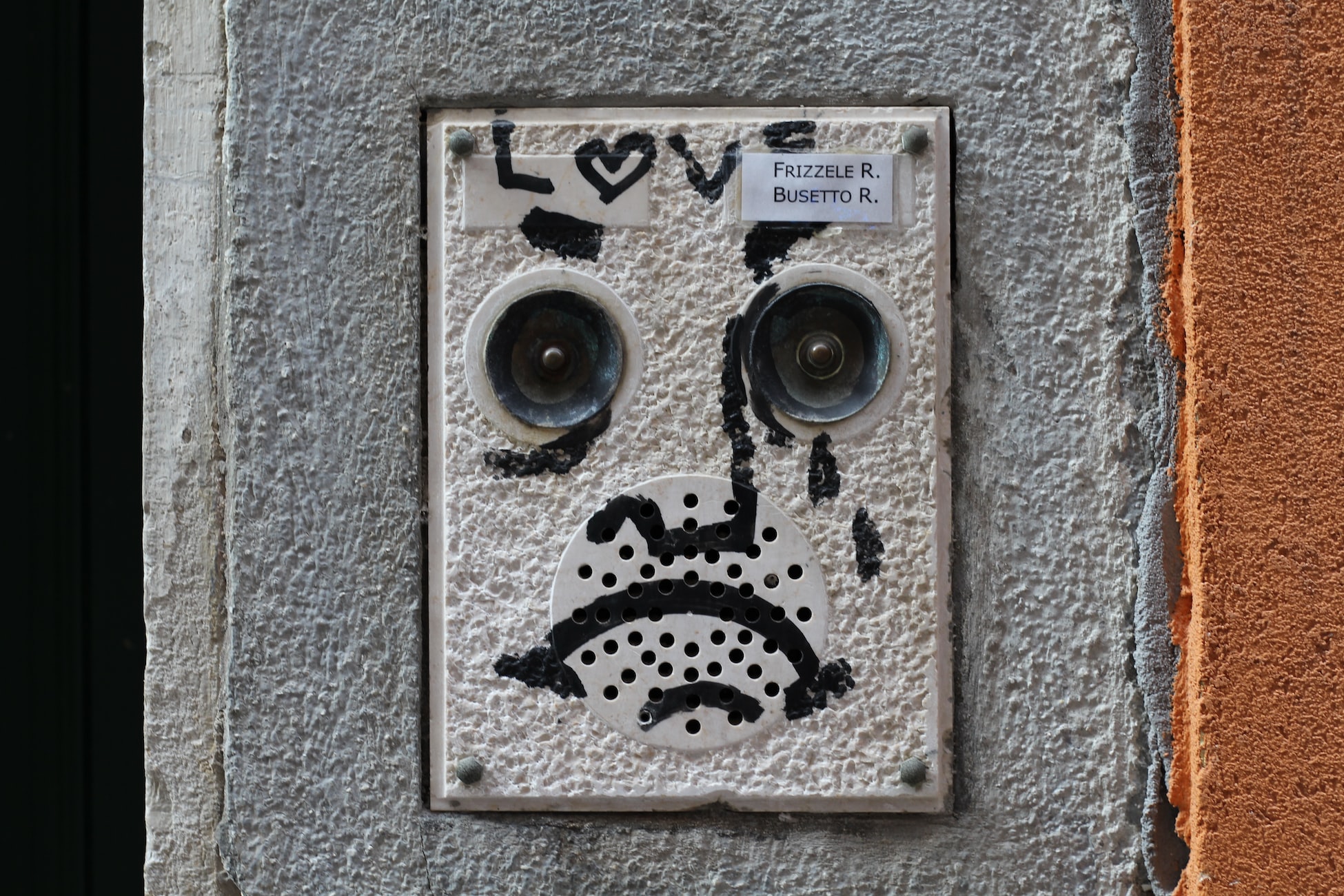 Amazon's Ring and the Threat to Privacy - A Real Life Version of Big Brother?

Two words. Mass. Surveillance. Who would have thought that a company loved for its convenience and quick delivery would be one to worry about with regard to offline privacy? That seems to be the case with Amazon and its ever-growing home surveillance network through Ring, an Amazon subsidiary known for its popular camera-equipped doorbell. Not only do companies know your every move online, but they (and various police departments) now have new resources to track you offline.

A few months ago, Ring started creating partnerships with police departments nationwide, allowing officers access to surveillance videos of Ring users. To begin with, nature of the partnership is very secretive, and there is great potential for corporations, law enforcement, and governments to abuse Amazon Ring's surveillance abilities. This article examines the different possibilities.

What is Ring and What is the Situation?

Ring is a home security and smart home company that was created in 2012 and was acquired by Amazon in 2018 for a reported $1 billion. Ring's most popular product is their camera-equipped doorbell which uses a motion detector to activate the camera and microphone. The video and microphone are accessible by the homeowner through Ring's mobile app for two-way communication. It is known for its recording capabilities and help in preventing package theft and protecting one's home. With Ring's new partnerships with law enforcement, will Amazon become a real life version of Big Brother? Will our privacy continued to be threatened, even offline?

Everything started with the launch of Ring's Neighbor app in 2018. Neighbor allows users to join local groups that crowdsource information regarding crimes, suspicious activities and share video footage captured by Ring devices. The Neighbors app also allows local police departments onto the network where they can access the discussions and videos.

Since the launch, Amazon has worked hard to enlist local police departments around the country to advertise their cameras in exchange for free Ring products (more on this below). At the time of the writing of this article, there are 1024 police departments who have partnered with Ring and have access to the Neighbors app. On 07/03/2020, we took at look at the numbers to see if there were changes and there are now 1,416 police departments and 15 fire departments involved. 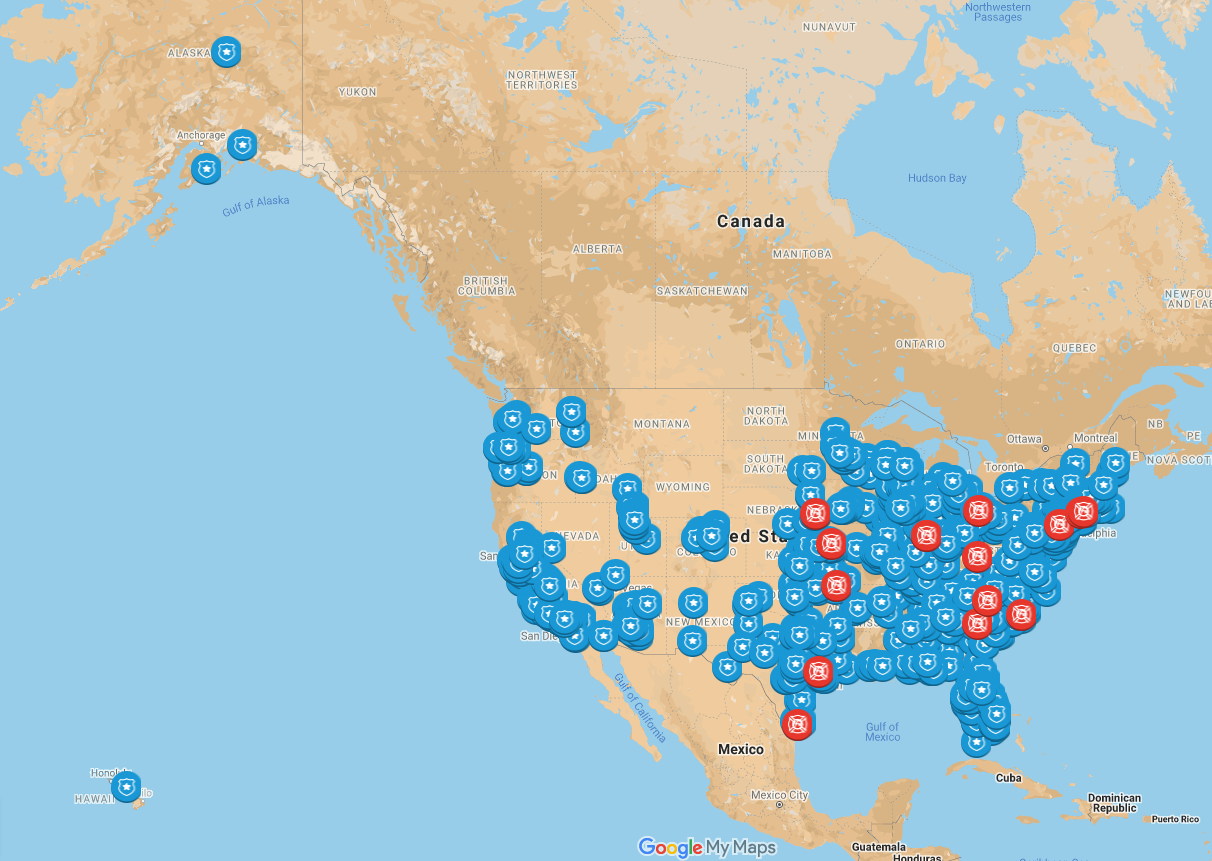 This is a map with all of Ring's police department and fire department partnerships as of 07/03/2020. See it for yourself on Google Maps.

How Police Departments Can Use Ring

Police departments have the authority to create bulk requests for every video recorded by a Ring device in a certain area. Ring will send out an email to all users that are in the area notifying them of the request. Officers don't need a warrant to request these videos, the users just have to give permission. Ring users are free to decline requests and unsubscribe from the notification emails, however, Amazon has coached police officers on how to persuade their users. 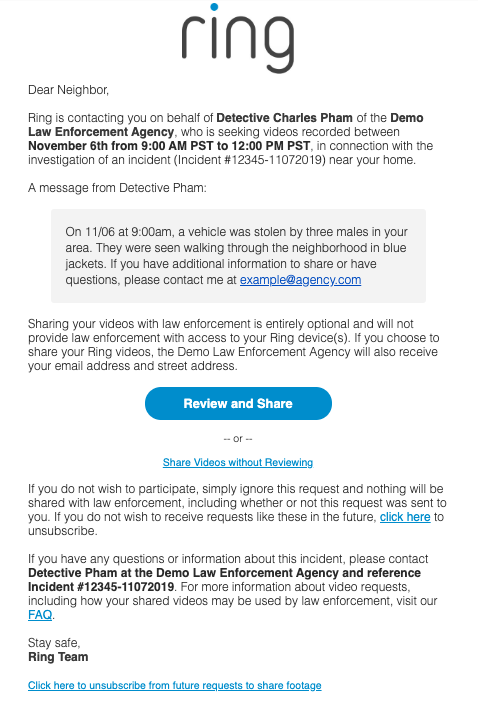 Disturbing Details of the Partnership

Due to the secretive nature of the partnerships, we do not know many contract details. However, a public records request in Lakeland, Florida, recently surfaced emails and a signed memorandum between Ring and the Lakeland Police Department that have been able to shed light on some of the details. The documents have revealed that the police are contractually obligated to "Engage the Lakeland community with outreach efforts on the platform to encourage adoption of the platform/app."

To maintain the Ring partnership, police departments must assign Ring-specific roles such as press coordinator, social media manager and community relations coordinator to some of their officers. Specifically, the Lakeland police department is rewarded with $10 towards free Ring cameras for every Lakeland resident that downloads the Neighbors app.

In addition, police departments that have partnered with Ring are not allowed to publicly speak about Ring or the Neighbors app without Amazon reviewing their statement. This agreement covers everything from press releases to social media comments. A press release from the Ewing Police Department was edited by Ring representatives to remove the words "surveillance" and "security cameras" before it was released to reporters.

This is a clear violation of public trust and a misuse of taxpayer money. Not only has Amazon turned public servants into a salesforce whose words they control, but the confidentiality clauses in these contracts prevent the public from understanding how this program affects our neighborhoods and safety.

So What's the Problem and How Does This Affect my Privacy?

To start, since warrants are not necessary, police are able to gather massive amounts of video footage through Ring. Once they have obtained videos, police departments can keep them indefinitely, even if they aren't related to any ongoing or previous investigations. Once footage is in the hands of the police, there's lots they can do with it - run it through facial recognition software, share it with other law enforcement agencies, and more...

Additionally, most folks know by now that once you post a picture of yourself on the Internet, you no longer have control of what happens to it. Similarly, this is the biggest problem with Ring. Once the company captures your image (without your permission), you no longer have control. The unfortunate thing is all you have to do is walk past a house with Ring installed on a public sidewalk and you'll be on footage forever. If you're in the wrong place at the wrong time, you may even end up in an Amazon advertisement. Ring isn't just an issue for those who purchase the devices -- Ring installations invade the privacy even of those who don't opt-in and agree to the terms of Amazon's onerous terms and conditions; the collateral damage to community privacy is substantial.

Law enforcement agencies aren't the only ones using surveillance videos from Ring. In June 2019, Amazon created Facebook ads that showed uncensored photos of people whom Ring users have accused of crimes. If Amazon is already using user footage to market & sell their Ring products, what's next?

is it legal for ring/amazon to use faces of people, suspected BY THEIR CUSTOMERS to have done crimes, in an advertisement? >especially given they havent consented or been convicted or anything. seems uhhh not right pic.twitter.com/a6SnOGT5dl 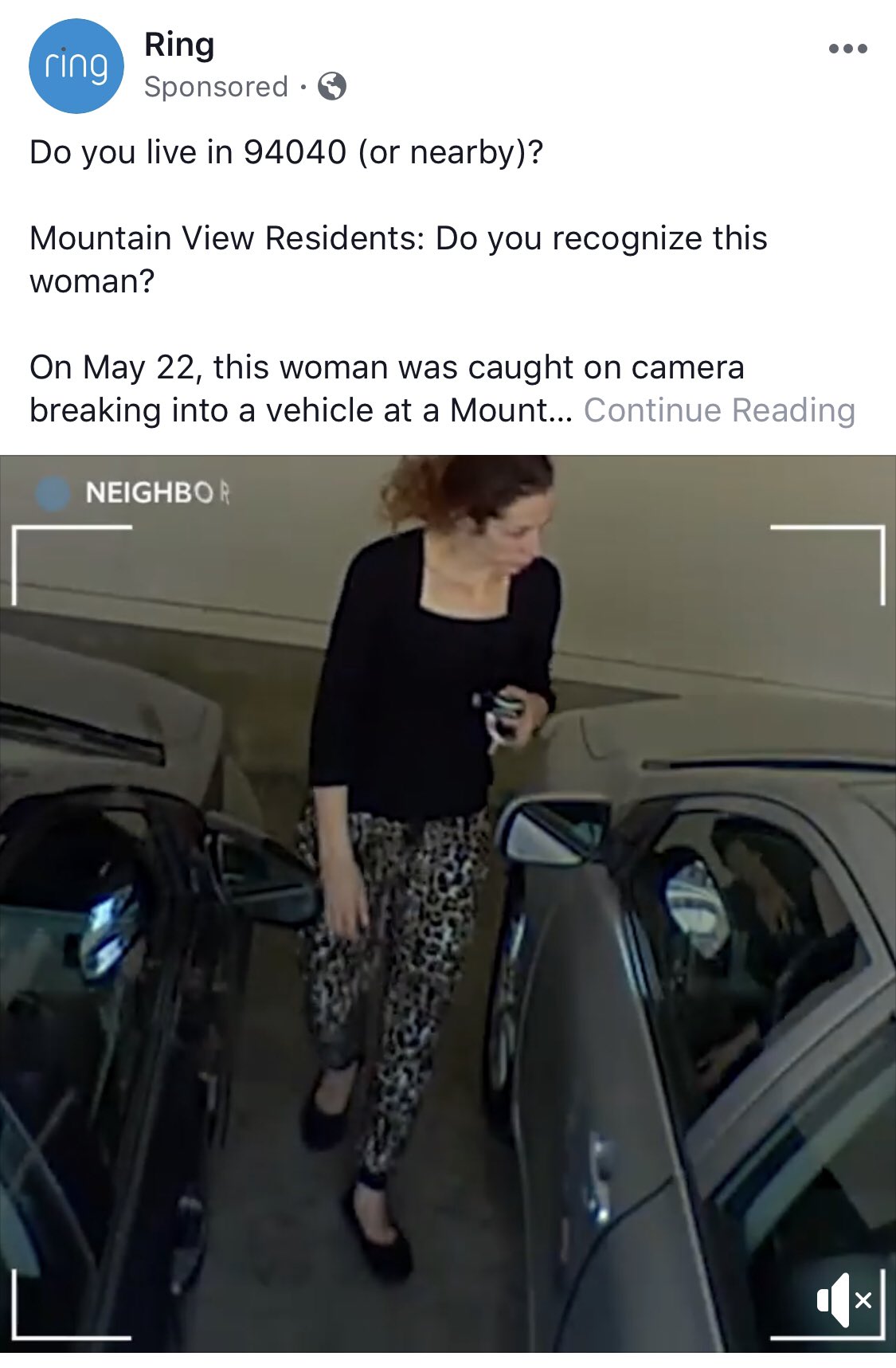 The above Tweet was actually quite controversial and many questioned whether these types of ads were a violation of privacy. A report from Buzzfeed found that Ring users, “grant Ring and its licensees an unlimited, irrevocable, fully paid and royalty-free, perpetual, worldwide rights to exploit Shared Content for any purpose.” In short, Amazon can use Ring customer video footage to generate sales, and are not obligated to share financial benefits with those in the video -- and this from video footage that is supposed be used to keep our neighborhoods safe.

Amazon's motivations are no mystery -- they're a corporation, and like any corporation, they want to make money. There's lots that can be done with the footage Ring devices collect -- Amazon can identify when packages have been delivered to you, help prevent theft from your doorstep, let you know when guests have arrived, and more -- but Amazon can also log who your neighbors and friends are (or others who happen to be walking by in your area), track when you enter or leave your home, and listen in on private conversations. With Ring, we really have to ask ourselves -- is inviting a major corporation, their partners, and law enforcement into our homes really worth it? And since the decision to purchase a Ring device doesn't only affect you -- are you sure your friends, guests, neighbors, visitors are all amenable to this as well?

Privacy Matters and We Must Continue Fighting For It.

Our desire for safety has been exploited by Ring, and Amazon knows that they are invading our privacy. In Ring's Privacy Policy, it states the following: "Capturing, recording or sharing video or audio content that involves other people, or capturing others [sic] peoples’ facial feature information, may affect their privacy rights."

At FreePN, we believe in protecting everyone's privacy, both online and offline. Constant video surveillance for the sake of safety may appear convenient, but it's a great hindrance to our privacy. We should want to protect our safety, but secretive agreements between corporations and law enforcement regarding public surveillance are not what we're looking for. In situations like this, increased transparency is a must.