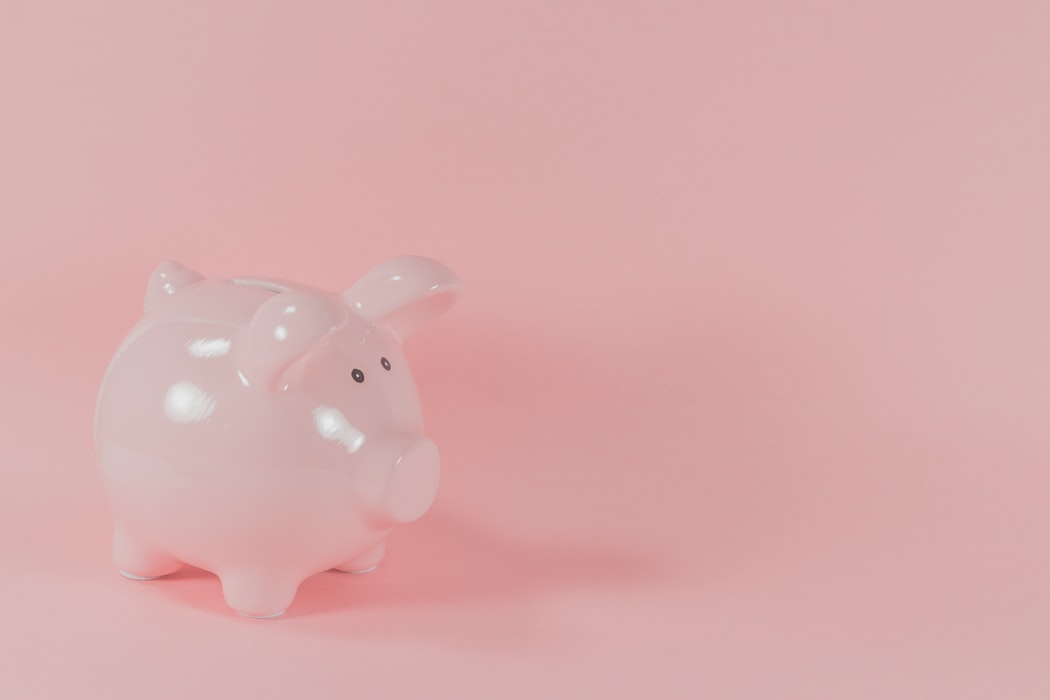 How to Save Money Using a VPN

In our "5 Reasons You Should Care About Privacy" article - we briefly mentioned the idea of dynamic pricing and price discrimination, location-based tactics that many companies use to justify raising prices.

How does a VPN help someone save money?

Trustworthy VPNs allow individuals to take control of their online privacy and protect them from third parties trying to access personal information. VPNs do this by encrypting your traffic and hiding your true location.

With a provider that has a large number of geographically-distributed servers to choose from, you can use a VPN to effectively change your apparent Internet-access location. Using this feature, you can take advantage of price discounts and protect yourself from price discrimination via dynamic pricing.

Dynamic pricing is essentially when a company takes advantage of your location and browsing history to dynamically adjust the price of their product or service. Practically speaking, this means that if you've viewed a product multiple times or if you’re located in a “wealthier” region (or even zip code), you may be getting charged higher prices.

Dynamic pricing is not only costing you money, but it’s also an invasion of your privacy. Companies rely on trackers in your browser and other personal information (like your location) to execute their dynamic pricing strategies. Keep reading below to learn about the history of dynamic pricing, how it works, and how to save money using a VPN.

The History of Dynamic Pricing

Dynamic pricing has been around for ages. In its earliest form, dynamic pricing could be found with shopkeepers lowering or raising prices based on the supply in their stores. If demand was high and supply was limited, shopkeepers would often raise prices right on the spot.

In the 1870s, the invention of the price tag made the average shopping experience both faster and less biased. No longer could prices change in seconds based on factors like one’s appearance or changing supply. The 'price tag' model has been around for going on 150 years, and is still the standard at most physical retail stores today.

In the modern era, the airline industry was the first to transition from a set price tag system to a computerized system where prices shifted throughout the day or week. Before the 1980s, the American government heavily regulated airline prices. Afterwards, following deregulation, the airline industry took charge of setting prices.

Formerly, airlines set prices based on what airline ticket clerks felt was right to charge based on flight time, distance of flight, number of seats available, and how close to the flight date the booking was, amongst other criteria. This paradigm was massively inefficient and resulted in a substantial revenue bottleneck for the industry. To remedy this, airlines invested millions into software that cloud automatically updates prices based on a variety of input factors (such as the weather, price of oil, etc.). Due to the quickly apparent success of this software, the rest of the travel industry quickly followed suit, with everyone from hotel chains to cruise lines rapidly adopting similar software-based systems. Before long, retailers caught wind.

The Internet revolutionized the way we live, work, and of course, shop. In 1991, when the National Science Foundation (NSF) lifted its restrictions on commercial use of the NET, the Internet and online shopping saw remarkable growth. Amazon and eBay were among the first generation of companies to take the idea of an “electronic marketplace” to an entirely new level.

As the various e-commerce platforms grew, so did the technology. In many ways, the Internet made it incredibly easy to compare prices, making price (once again) one of the most important factors in the consumer decision-making process. This shift created a very competitive landscape, forcing many companies to update their product prices several times a day.

As you read in the previous section, today, many industries use dynamic pricing in their business strategy. Most people are exposed to dynamic pricing when booking travel logistics - flights and accomodations. I’ve certainly seen it in my own browsing experience - I've oftentimes found a really cheap flight, then returned to it an hour later, only to find that the price had increased! This is dynamic pricing in action.

From other experiments that I’ve done and others that I’ve read about, I’ve seen prices change based on location. Companies know that certain countries/zip codes have a higher cost of living and income per capita than others (i.e. United States vs. the Philippines, or Manhattan vs. Minneapolis), and accordingly, Americans typically see higher prices than Filipinos when browsing the same website (and likewise with New Yorkers vs Minnesotans). However, sometimes the inverse happens -- Filipinos pay more for certain products & services than Americans -- because better rates are offered for hotels and car rentals as part of "vouchers" or "promotions" to encourage tourism.

Back in 2012, travel site Orbitz was found to have been using controversial pricing tactics, adjusting prices for Apple Mac users. This happened after Orbitz discovered that Mac users were prepared to spend up to 30% more on hotel rooms than users of other OSes. In the same year, the Wall Street Journal revealed that Staples had been offering the same product for different prices on their website based on a user’s proximity to competitor stores. These are just some examples of the ways that companies have tried to draw more money from specifically targeted customers.

These tactics may seem unfair to some shoppers, but businesses frequently rely on these tactics to increase their profits. According to Invesp, shoppers in the US spend an average of $1804 in e-commerce purchases online. In countries like Russia and Brazil, users spend an average of $396 and $350 annually online. For many businesses, specifically targeting users online is not only more profitable, it's a necessity.

Fear not though, VPNs provide an easy way to protect yourself against such price discriminations and even use it to your advantage!

How to Save Money Using a VPN

Let’s look at some real life examples of how using a VPN can change prices of the same flight and hotel.

Through my personal experience, I’ve found Kayak to vary greatly in price based on location, so that’s what I’m using for an example. Below, I looked at prices for a round trip flight from JFK (in New York City, USA) to DEL (in New Delhi, India) for May 6, 2020 - May 13, 2020 using an incognito browser without a VPN. Keep an eye on the middle option from Turkish Airlines (the one departing at 12:10am). It’s $710 for this ticket without the use of a VPN. 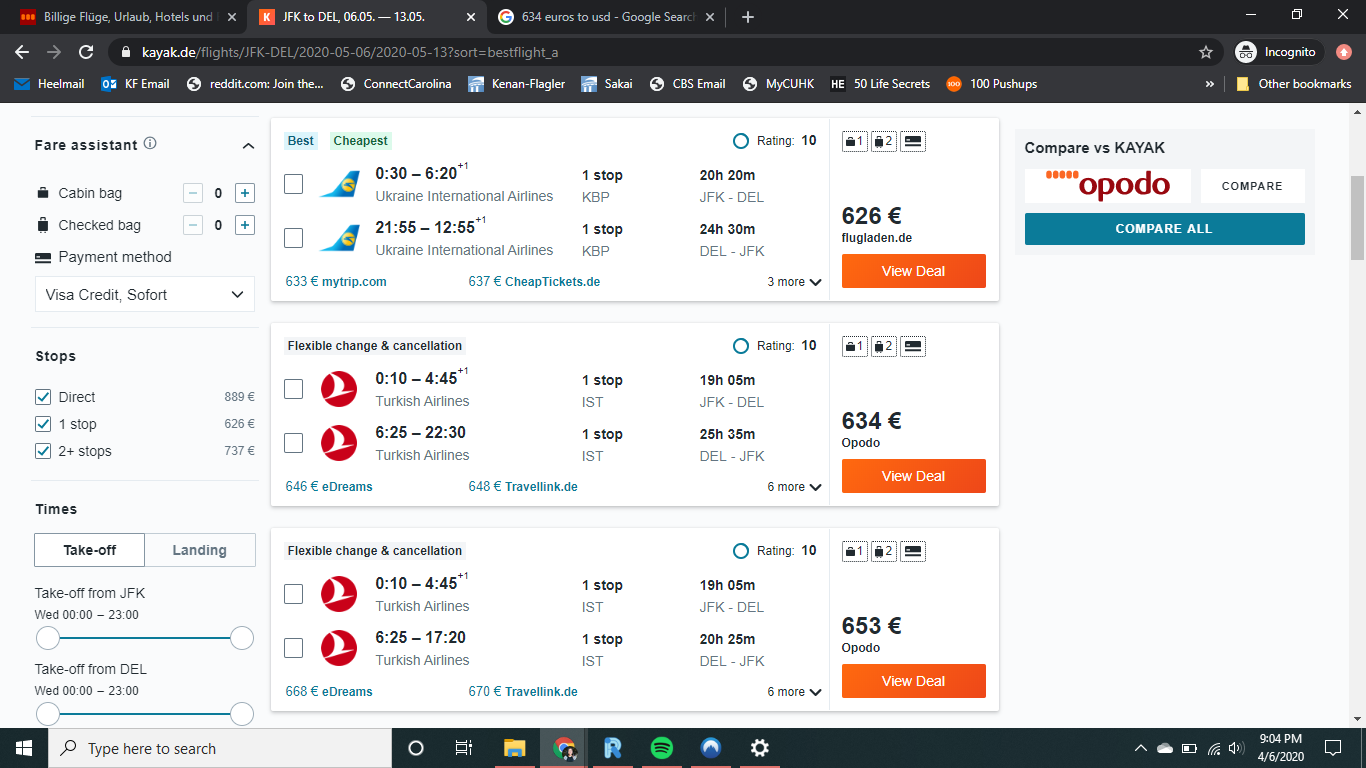 Here’s what I got when I used a server that was located in Germany. The same flight in the middle is now €634 which at the time of the writing of this article was equivalent to $685.68, about $24 cheaper than the original search I did. This was a similar case with the Ukraine International Airlines deal. The first deal (without the VPN) was almost $16 more expensive than the deal with the VPN. 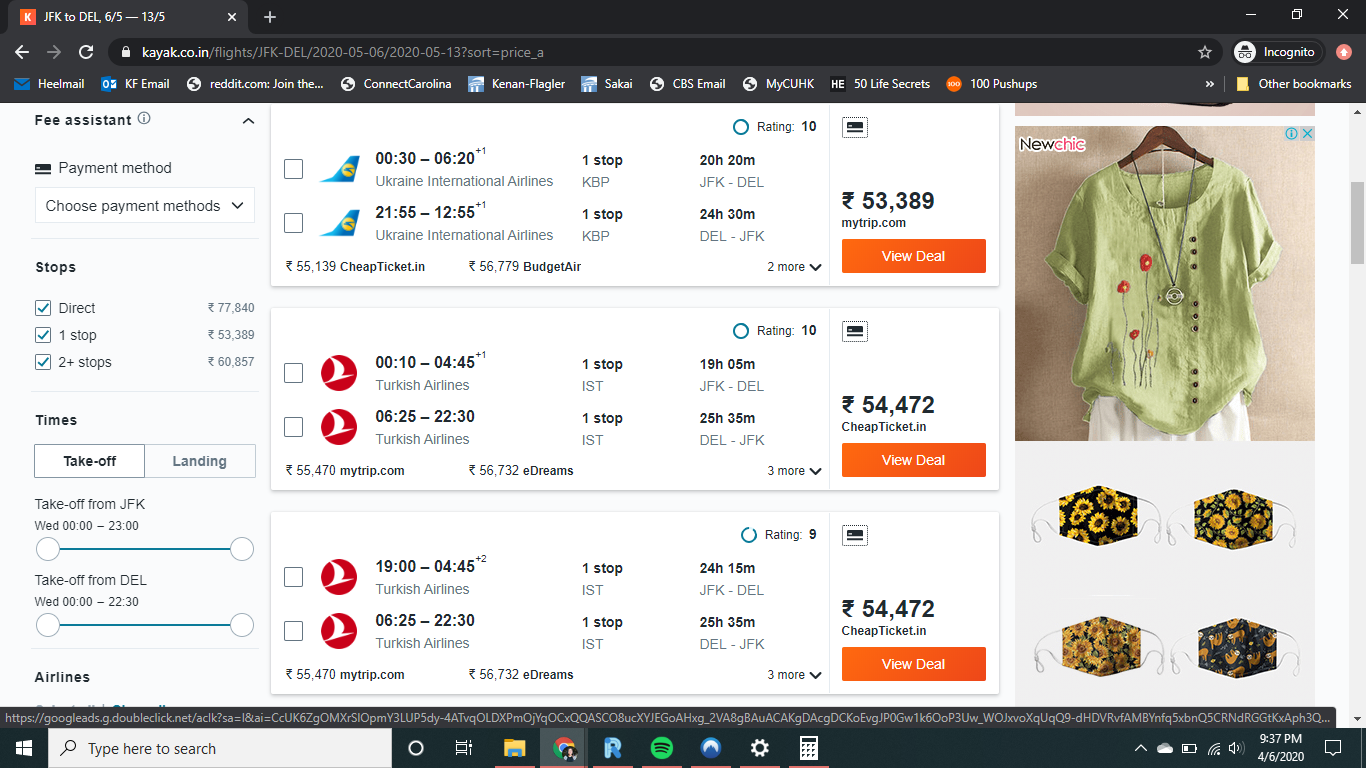 Next, I used a VPN with a server location in India, to see if it would be cheaper since I was using a VPN in a location where I was intending to fly to and since India has a lower GDP per capita compared to the US. In this example, the ticket was ₹54,472, the equivalent of $717.35 at the time of this writing. It’s not a crazy difference, but it was surprising to see that the price while using a VPN with an IP location in India was higher than any of the other prices I’d found. 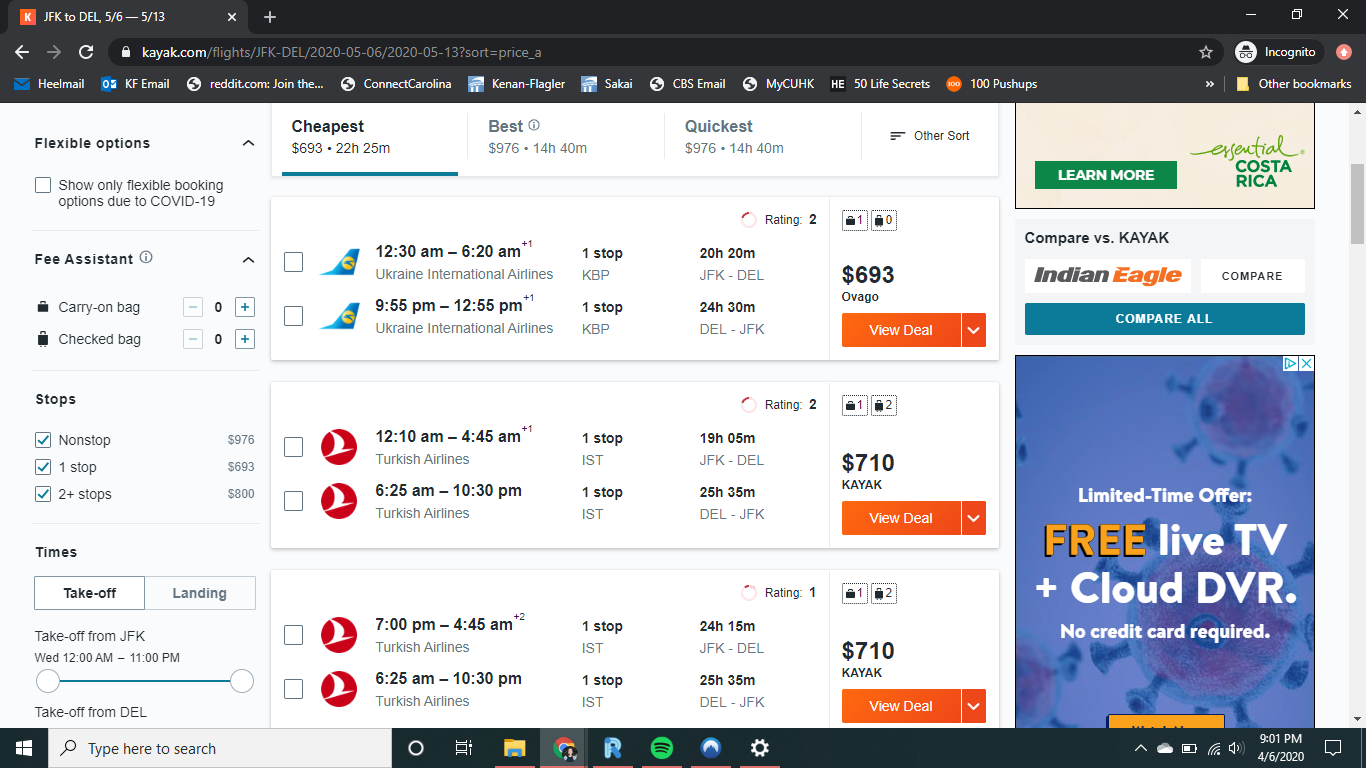 This next example is regarding the changes in hotel prices in San Francisco, California for the night of April 8th, 2020. It was £427 booking from a location from the UK. This is approximately $526 (based on conversion rates when this article was written.) 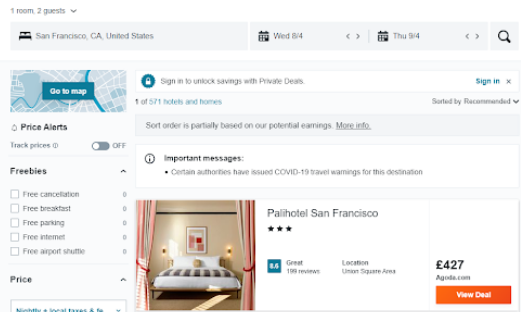 On the other hand, it was only $440 when it was booked using a VPN server located in San Francisco, US. That’s about $86 saved for a night’s stay! 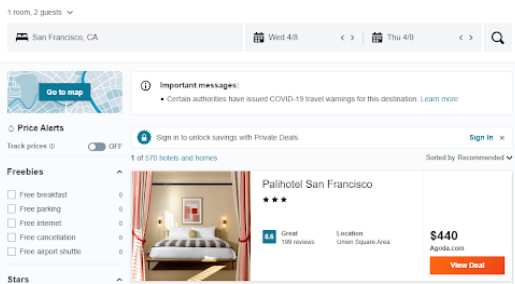 Full disclosure, I haven’t quite found perfect system as to how the prices change based on location. It took some playing around with server locations, but it was pretty exciting when I actually was able to find cheaper prices just by changing “my location”. From my experiences, kayak.com and hotels.com are some of the sites that this strategy has worked best on. A specific note for Mac users: you may want to try spoofing your browser's 'user-agent' string.

Why use FreePN to help you save money

As you saw in the examples above, you can easily save money by using a VPN! However, in order to do so, you need a good VPN provider that you can trust. Like we mentioned in our article “Are Free VPNs Safe? Here’s the Dark Side to Most Free VPNs,” most other free VPN services (and many paid ones) are hard to trust. Some will log your activity, or sell your data to third parties -- the exact opposite of what they’re supposed to be doing: protecting your privacy. FreePN has a strict no logs policy. The way our technology is built, we couldn’t log you even if we wanted to (we don’t want to, for the record)!

Through the use of a VPN and the regular clearing of cookies, you may start to see prices decrease in your day-to-day shopping. Using the example we outlined above as a template, shopping over a VPN connection local to the country you're planning to travel to can save you big $$$.

We hope you can use the strategies and methods laid out in this article to help you save money! If you’re able to find a good deal using a VPN, let us know by tagging us on social media! @free_p_n on Twitter or @free.pn on Instagram. Happy shopping!